Here is a pic of Allison singing at church this morning:

I enjoy working on this webpage. There may not be a single soul that visits it, but I’m learning a lot. I keep trying to throw new things on here, like adding the Upcoming Events thingy on the left. I had been using Google Calendar to try to do this, but I can’t seem to retreive the information in the correct order. Like, today’s 1:00pm appeared after Saturday’s 9:00am appointment, because I put Saturday’s in first. Weird.

Anyway, I wanted to say congratulations to Devon and Amanda. They were married on Saturday, April 8. Here is a funny photo:

This is just a mini-blog.

So, country this week, huh? Some will be strong, others may be week. What will Chris sing? Can I single-handedly keep Katharine out of the bottom three? These questions and others will soon be answered…

Hey! Whoopi’s in the audience! Cool.

Alright! Taylor – singing Country Roads! This could be good. Hey, I’m a West Virginian, so I might be a little partial! Simon will hate this. I like Taylor’s voice, man, he is good. Simon will not like this. Randy’s right about the personality. “safe, boring, lazy” about what I expected from Simon.

Yes, I’ve been to the website Ryan. Thanks. You are just goofy.

Mandisa – Puttin’ her own flavor on this song. Something Taylor really couldn’t do. Not bad for the genre. This is not her strong suit, and she’s doing quite well. Different enough from the original, but still recognizable.

What’s up with Ryan and the judges tonight?

Elliott – Interesting song choice from him. He’s got good vocals, and I think he’ll be able to put his own spin on it. I like Kenny’s advice to him. Make ’em cry. That’s what I say. Not bad. A little safe to me. A little like Taylor, he needs to bust out a little bit.

Paris – Ewww. Bad opening. I don’t particularly like this song choice from her. She’s got a real big voice. It was a decent ending. I think she stuck a little to close to the original and didn’t own the song. What is Simon on? Hmmm… interesting.

Ace – Hmm… Kenny, interesting comments. Not bad, not bad. Ace did pretty well tonight. That was good vocally. He knows his audience and he sang straight to them. I don’t know, however, whether it’s good enough to keep him hanging on this week. I, personally, liked it, but will it motivate enough people to vote for him?

Kellie – This could be good. Her voice fits this song perfectly. You knew she would do good this week. She sounded as good as the original. That was well done. Not much else to say, really. I expected her to do good, and she did. Best of the night so far.

Chris – Actually he is doing quite well. He’s not struggling. He was a little shakey in spots, but the vocal was quite good. A little too low in spots, but I am glad he did well. I somewhat agree with Simon in the “boring songs” category, but not so much as far as Chris as concerned.

Katharine – That’s the kind of music she should be singing. I am so glad to see her having fun tonight after seeing the serious side of her for the past of couple of weeks. Vote vote vote. Keep her out of bottom three, people. That was very good.

Bucky – He shouldn’t still be here. On country week, he picks this? He is not a country ballad singer. He could’ve picked a little bit of anything. I didn’t like that song choice at all. Something just didn’t sound right. He needed something more down-home. Up-tempo. I really like Bucky (the person). He’ll be fun to watch on the tour. But I haven’t liked his voice since week one.

Okay, now to clean this up, slap it in some kind of order, and put it on AmericanIdol.com 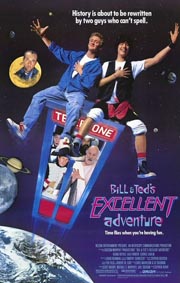 I’m sitting here watching “Bill & Ted’s Excellent Adventure.” This is a very funny movie. I like some of the silly scenes, like when Billy the Kid is trying to throw the football with Socrates. That concept is just funny. Some of it is just corny, but a lot of it is downright funny.

We’ve been building a deck on the back of the house. I am glad I’ve had so much help here this weekend to get things going. I am not very mechanically inclined. I have managed to carry a lot of boards and screw a few screws in, but beyond that, I’m not much help. I should take some pictures and upload them soon.

Well, it was a good run. The Mountaineers lost Thursday night (er, Friday morning?) to the Texas Longhorns by a score of 74-71. Wild finish in that one. WVU tied the game with about 5 seconds to go at 71, but Texas got the ball down the other end of the court and scored with under a second left to win.

The main thing that killed the Mountaineers (to me, anyway) was lack of rebounding. Texas got way too many second chance points. The Mounties have had a good couple of seasons here, but I think next year will be termed a “rebuilding” year.

Hey, what more can I ask for? WVU Football wins Sugar Bowl. Pittsburgh Steelers win Super Bowl. WVU Basketball makes Sweet Sixteen. It’s only March and this has been a great sports year.

Man, when will I learn! I have been sore for the past couple of days after playing basketball on Sunday. It was our church’s version of “March Madness” – youth vs. adults. The adults had to uphold their title after defeating the youth last year, and we did it — twice! But we are all sore today. I need to see if I can get somebody to e-mail some pictures of the event. If so, I’ll post them up here.

Hey everyone! Thanks for visiting my site. This is still definitely a work in progess, so give me some time to work the bugs out of this thing and I’ll be up and running soon.

Here we go! 🤩 #AmericanIdol will be back for a new season on ABC!

Big news from the CDC: If you’re fully vaccinated, you do not need to wear a mask – indoors or outdoors, in most settings.

We’ve gotten this far. Whether you choose to get vaccinated or wear a mask, please protect yourself until we get to the finish line.

RT and tell the world 🚀

Hey #WindowsInsiders, exciting news! 🐛 We have a new #BugBash for you starting today through May 17! Inch closer to your next achievement badge by completing Quests and filing feedback in the Feedback Hub: https://aka.ms/FHQuests. New Quests will be released daily!

SpaceX launching satellite Doge-1 to the moon next year